05/27/11 – Strange things are happening in Shawmut/Fairfield on the Kennebec. The flow is heavy and levels are high in Shawmut yet in Fairfield the landing is high and dry. They must have the gates in Waterville wide open again. I hate it when they do that.

Water temperatures are perfect in the Kennebec right now. At least in Shawmut where I got a nice 56 degrees. I just got back from Grand Lake Stream so I don’t really know what’s happening for hatches but some must have started. Hendrickson mayflies should be out and about along with Blue Winged Olives. The temps that are forecast for this week should bring caddis out and the feeding will really start.

That is if we can get the flow down just a little bit. The East Outlet is over 5,000CFS all day. Harris is over 6,000CFS all day and Flagstaff is over 1,500CFS all day – that’s a lot of water still coming our way. Not to mention that the Sandy and Carrabassett are both flowing over 1,200CFS. But even with those levels there’s fishing to be had but you’ve got to look for it.

Solon is running at 6,500CFS and Madison is over 7,000CFS but those are floatable levels and while limited there is wading to be had. I don’t see it dropping real soon, at least not below Madison, as the western part of the state is supposed to get thunderstorms off and on all week and that will keep the 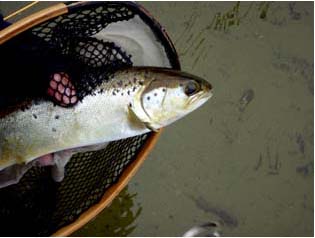 Sandy and Carrabassett up. But Solon and Bingham should be in good shape by the middle of next week. Of course that doesn’t do the Memorial Weekend much good but that’s the way it is so I guess we have to deal with it.

GLS was also high. It ran over 1,000CFS all the time I was there – except for the last day – then it dropped to 900CFS – not much help. But the stream held fish and if you paid attention you could wade some sections. It’s still over 600CFS but since the fishing was so good at 1,000CFS plus I wouldn’t let that flow stop me from going.

if you’re up for a one minute or so video click on this link and watch a video I made of a salmon feeding on nymphs. This was repeated frequently each day as fish were hugging the banks to avoid the flow. You had to watch where you were wading so you didn’t spook fish. As it was I spooked my share. Great place to learn how to spot fish in the water.

And last but not least if you’re looking for a place to go this weekend don’t forget the West Branch of the Penobscot. The flow there is down to 3,000CFS which is high to some but a lot more fisher friendly than it has been.

Good luck fishing – get out there it’s happening.